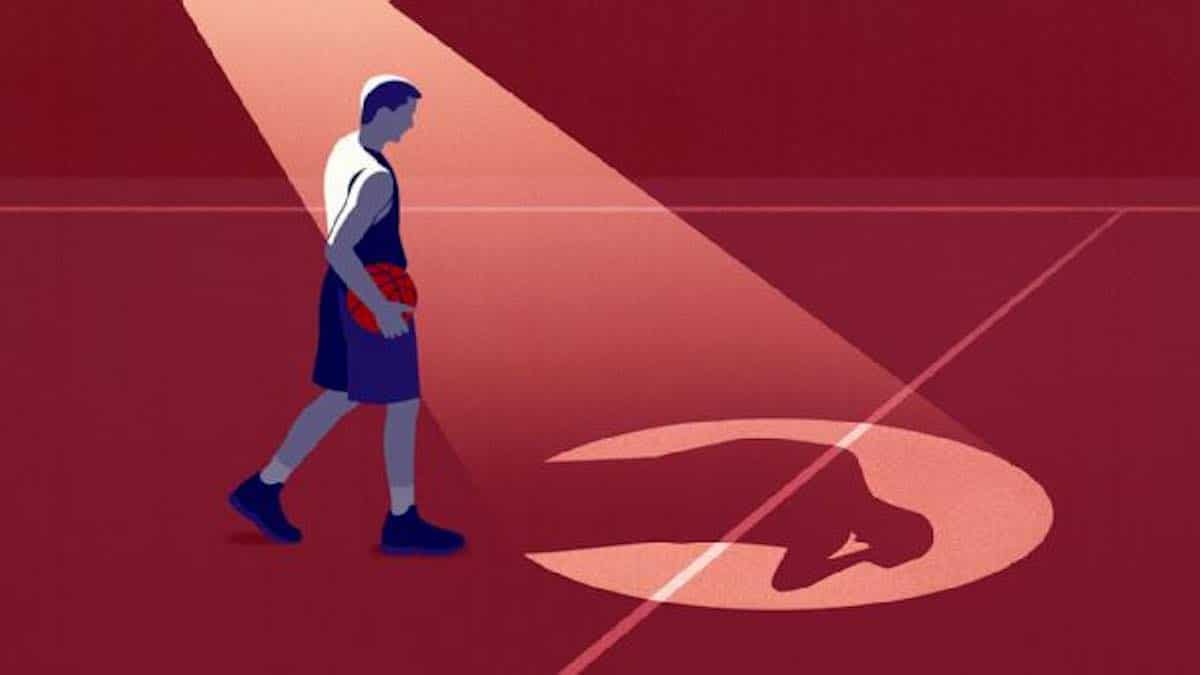 LOS ANGELES — I WAS JOSTLING for position with a gaggle of journalists and losing ground, sandwiched four-deep in a sea of bodies during media availability at the 2018 NBA All-Star Game in Los Angeles.

It was hardly an ideal environment to broach such a sensitive, personal topic as mental health, but Cavaliers forward Kevin Love had hinted three weeks earlier in Cleveland that he might be ready to share. At that time, I was interviewing Channing Frye in the Cavs’ locker room regarding his depression following the deaths of his parents, while Love, sitting at the adjacent locker, listened intently to our conversation.

“We all go through something,” Love said, cryptically, as I stood up to leave.

Now Love was perched on a dais in a ballroom at Staples Center in front of a long, flowing black curtain, fielding innocuous questions regarding his workout regimen. I navigated my way to the front of the pack and lofted Love a couple of warm-up questions regarding Frye. Once Love acknowledged that Frye’s candor was “an important step” toward putting a face on mental health, I had my opening.

“Have you ever,” I shouted above the din of the All-Star media day madness, “sought professional counseling?”

Suddenly, silence. The incessant chatter at surrounding podiums persisted, but in the vacuum of Kevin Love’s space, everyone stopped, turned … and waited. Love fixed his eyes on me, hesitated ever so slightly, then straightened his broad shoulders and leaned into the microphone.

So began Love’s public journey as the NBA’s unofficial (and eloquent) spokesman on mental health. The willingness of Love and DeMar DeRozan to step out of the shadows and reveal their struggles has set the NBA on an important path of self-discovery. It has prompted the National Basketball Players Association to hire Dr. William Parham as its first director of mental health and wellness, and it has convinced commissioner Adam Silver and union head Michele Roberts that hammering out a comprehensive mental health policy needs to be a priority.

Yet there remain many obstacles to confront, chief among them the stigma attached to mental health that prompts many players to suffer in silence. There’s another critical sticking point: The union insists that mental health treatment be confidential, but some NBA owners, who in some cases are paying their players hundreds of millions of dollars, want access to the files of their “investments.”

Confidentiality, says Love, has to be non-negotiable. Without it, he says, he never would have become comfortable enough to announce from that All-Star dais that he was seeking treatment.

Within seconds of Love’s declaration that day, I frantically gestured to NBA senior vice president of communications Tim Frank and Cleveland Cavaliers communications director BJ Evans to arrange a private moment with the Cavs forward. That private moment turned into 25 minutes of earnest discussion behind the curtain (literally) of one of the most accomplished players in the game.

While LeBron James, Kevin Durant and James Harden fielded queries on the most delectable wine, the coolest dunks and the best cities for sushi, Love and I sat in the players’ sanctum directly behind them, unpacking one of the most prevalent issues facing the NBA — and society as a whole. While Love explained that most of his social anxiety occurred off the basketball court, newly minted Hall of Famer Steve Nash, happily oblivious to the weighty topic we were addressing, playfully launched soccer kicks the length of the ballroom.

“I have anxiety, but I also come from a family with a history of depression,” Love told me on that February afternoon. “It’s difficult to talk about. It’s difficult to confront. I finally had to say to myself, ‘Your whole life these things will affect you, so how are you going to manage it?'”

Love’s struggles were one of the worst-kept secrets in sports. Three months earlier, he had experienced a panic attack during a game against the Atlanta Hawks and had to abruptly leave the court. He also left the team in January following a game against Oklahoma City, prompting then-teammates Dwyane Wade and Isaiah Thomas to confront him regarding his mysterious illness. Love, however, says he did not have a panic attack during the Thunder game.

Both incidents provided excellent fodder for gossipy NBA wives — and their husbands — who eagerly dished on Love’s mental health during the endless stream of All-Star cocktail soirees. While the outpouring of support was heartening once Love publicly announced that he was suffering from anxiety and depression, behind the scenes, mild derision and skepticism lingered. A small number of Love’s teammates weren’t buying the mental health excuse for his bailing on the team in the middle of a game. The withering criticism was piercing — and proof that the stigma of mental health remains alive and well behind closed doors of NBA locker rooms.

Love is acutely aware of that stigma. The topic of mental health was never discussed among his family members, despite a history of depression that he believes has been passed down from generation to generation. Love says anything but “just sucking it up and dealing with it” was perceived as weakness.

“The last thing this should be is taboo, but that’s what it is,” Love told me during All-Star Weekend. “I think about my dad [former NBA player Stan Love], coming from that generation. You don’t talk about anything. You hold everything in.”

How, I asked him, did his father react to Love’s revelation that he struggles with anxiety?

“We’ll see,” Love said with a shrug. “I haven’t told him yet.” (Turns out, Love doesn’t speak with his father all that much.)

Love’s candor was both striking and surprising, but when I brought up the November panic attack in the game against Atlanta, his demeanor changed. His answers became clipped and evasive, his jawline tightened, and his eyes darted around the room, as if hoping to navigate a hasty exit. It became clear that this was too much, too soon for Kevin Love. We agreed to revisit the subject later, when he was more comfortable. To read more from Jackie MacMullan, click here.