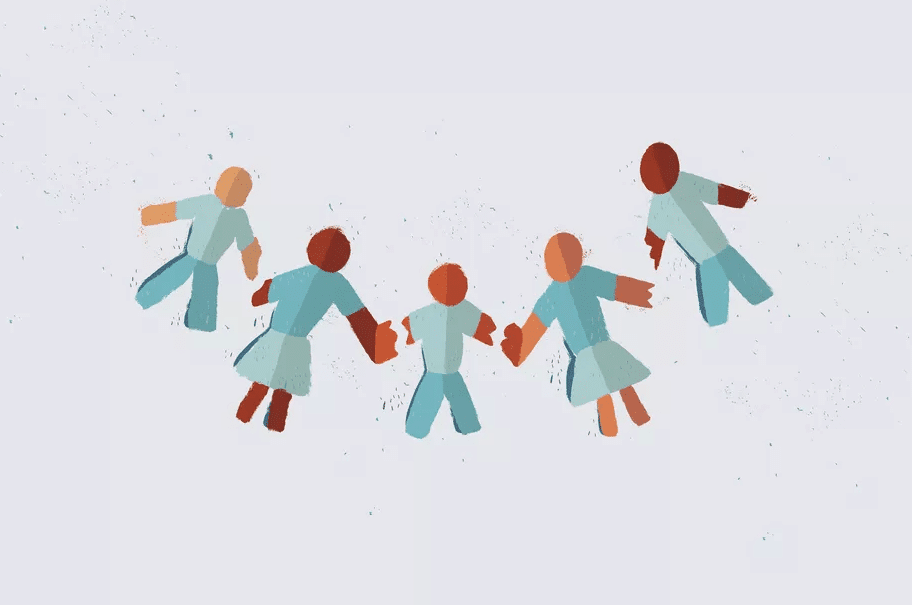 Science says there’s a risk we’ll lose some social connection if we spend the next few months standing at least six feet apart, but COVID-19 danger is real.

SALT LAKE CITY — My work friend told me her father had died. Without thinking, I gave her a hug. Then we both stepped back somewhat guiltily.

That was in March, the first day most of the staff stayed home. We were just learning about social distancing then, the 6-feet drumbeat still fairly muted as we started understanding a COVID-19-dominated world.

I haven’t hugged anyone outside my immediate family since that day nearly two months ago. But I miss it. I miss affectionate touch.

Why do humans shake hands? Why do little kids and love-struck teens hold hands? And why is a heartfelt hug so perfect to express both sorrow and joy or simply to say we’re friends? Touch even matters in language: When we care about people, we try to “keep in touch.”

COVID-19 has altered this aspect of our lives, said Jackie Shapin, licensed marriage and family therapist in Los Angeles. It has separated us from the connection, safety and comfort of touch right when we seem to need it most.

#PhysicalTouch recently trended on Twitter, probably because we miss it so much. The question is: How do we keep the benefits of touch while staying a safe distance apart?

Research says physical touch — and yearning for it — is part of being human. It’s good for us.

Not sure why parts of your character hold you back in your work? For Stress Counseling, Kearns Group helps individuals study the gap between goals and their achievement. Through a contextual counseling we reveal the stress that gets in the way and design strategies to better reach their achievement. Conveniently located in Greenwich Village near Union Square.

When we’re deprived of touch, stress and depression levels rise.

Oxytocin’s benefits include better sleep and improved ability to calm oneself, making touch especially valuable in times of stress. That’s not all touch does.

Affectionate touch is strongly linked to physical, mental and relational health, said Brooke C. Feeney, social psychologist, relationship researcher and psychology professor at Carnegie Mellon University, where the Relationships Lab is conducting a coronavirus impact study that includes questions on touch. Anyone 18 or older can participate.

Feeney’s research with Brittany Jakubiak, assistant professor at Syracuse University, shows varied benefits. Touch promotes personal thriving, even in adverse circumstances. It buffers pain and stress better than verbal support and increases feelings of security. It raises one’s willingness to embrace challenges and pursue opportunities and buffers stress when couples are in conflict or are trying to solve problems, Feeney said.

“Our work suggests that affectionate touch may be a simple yet effective intervention for improving relationships and enhancing social connection,” said Feeney — an optimal way to provide support since it shows someone is available and responsive without making the other person feel judged or seen as unable to handle things on their own.

Aldrich said touch is important at every age, but babies can actually die if deprived of touch, starved for affection. To thrive, newborns need to be held and cuddled, ideally skin-to-skin as part of the foundation for healthy physical and emotional development.

Even years later, babies who received lots of positive touch in their first six months are more likely to show better cognitive development than those who didn’t, she said.

For kids, lack of touch can lead to delayed development, behavioral problems and emotional issues, said New York-based mental health adviser Tom Kearns. “Conversely, kids who do have robust touch in their lives tend to develop faster, are better adjusted and happier,” he added.

Feeney said affectionate touch is a “reminder that one is valued, included, accepted, loved and cared for. It indicates that one is included in a social group.” Touch indicates connection to someone that conveys social inclusion more broadly, offering feelings of security and protecting health.

Studies from the Touch Research Institute at the University of Miami have long shown that children of all ages whose cultures include more touch are less likely to be aggressive than those that less often touch parents and friends. Institute director Tiffany Field, author of “Touch,” said positive touch boosts the release of “natural killer cells” that ramp up the immune system to prevent or fight illness.

Touch also impacts the health of older adults, said Kearns, boosting their immune system and alertness and creating positive feelings. “If touch is present and a part of their lives, the elderly are healthier, calmer, more connected and have a happier outlook on life.”

Older adults, though, generally receive less touch than others. They are also more apt to be isolated socially and physically, Aldrich said.

“Social distancing inhibits touch, especially for single individuals living alone. At a time when we need the immune system the most, we are being asked to distance ourselves from each other, causing us to disengage from a major immune booster and a valuable form of communication,” Mica said.

The bottom line is people need touch. And touch as a form of support is easy to do and hard to mess up, Feeney said, while others, like words, can be delivered with good intentions but leave the recipient feeling “weak, needy, incapable, or like a burden.”

The late Virginia Satir, author and therapist, made famous the notion that humans need four hugs every day to survive, eight for maintenance and 12 for growth.

History.com makes clear that the habit of touching associates, friends, even strangers goes back a very long way. Shaking someone’s hand was probably first used centuries ago to show “peaceful intentions” among strangers. Extending an empty hand confirmed the individual held neither weapons nor ill will. Homer described handshakes to convey trust in his classics “The Iliad” and “Odyssey.”

But touch was in trouble well before the novel coronavirus appeared. Nearly a year before public health officials started warning people to stay physically apart, The Guardian warned “social touch is being nudged from our lives. In the UK, doctors were warned last month to avoid comforting patients with hugs lest they provoke legal action, and a government report found that foster carers were frightened to hug children in their care for the same reason. In the U.S., the Girl Scouts caused a furor last December when it admonished parents for telling their daughters to hug relatives because “she doesn’t owe anyone a hug.” Teachers hesitate to touch pupils. In the UK … “half a million older people go at least five days a week without seeing or touching a soul.”

COVID’s made it worse.

“With the necessity of social distancing due to COVID-19, the fear is our already distant and less tactile society will regress and overall health, well-being and feeling about the world and others will decrease, potentially leading to increased depression, sadness and isolation,” Kearns said.

Psychiatrist Dr. Carole Lieberman said more bluntly that Americans could have “Touch Deficiency Syndrome.” “Our need for touch and human connection is very hard-wired into us from the days of cavemen, who needed to depend on others for protection, food and so on,” said the Beverly Hills expert, an author and legal analyst. “Social distancing is having devastating impact on our need for touch.”

Lieberman is riled by the idea that people should avoid handshakes for the foreseeable future. “When we are allowed out of our homes,” she predicted, “we’re going to feel awkward with each other, because we’ve been told to keep our distance in order to stay safe. Therefore, we react to other people as though they’re a threat just by being near us.”

Finding benefit, losing risk
Losing touch is one more reason COVID-19 has been a stressful, disheartening experience, said Dr. Patricia Celan, a psychiatry resident at Dalhousie University in Canada. Touch deficit has piled on “lower moods, higher stress and some health risks that can occur due to chronic unmanaged stress and consequent high blood pressure.”

That’s in addition to the fear sparked by the disease. One way to cope is to figure out how to replace some of what’s been taken away, while making sure even more isn’t lost.

People who are isolating together in family or other groups have an advantage. Parents can — and really should — give their kids and partners lots of hugs and caresses and physical affection. Squeezing someone’s shoulder as you pass is simple, but makes a real difference. Fisher suggests making it a point to hug and touch them more.

Some people are alone or with people they would not naturally touch. That doesn’t mean they’re out of luck. The experts I talked to said people can augment the touch they receive, no matter how little or how much.

Shapin recommends enhancing human contact when you can, “even if it’s as minimal as making eye contact, smiling or waving hello.”

People can use self-soothing techniques like self-massage to get some of the same benefits that touch provides. Shapin recommends paying attention to what it feels like when you apply lotion. Give yourself a manicure or pedicure. Pay attention to how touch feels when you wash your face.

Celan suggests petting or cuddling a pet. If you don’t have one, she said to consider fostering a shelter animal.

Field told The Los Angeles Times that touch-deprived people must find other ways to get the benefits that naturally come with touch. “They are going to have to be more active by doing sit-ups or walking around the room, because walking stimulates the pressure receptors under the feet and can give you a sense of touch. Yoga is a form of self-massage, or you can just be more attentive and massage your body. Anything that can move the skin with moderate pressure helps.”

Celan also recommends incorporating compassion into your life by saying kind things to friends and family through social media and offering a “shoulder to cry on.” Laughter releases oxytocin, too, so pick a funny TV show. Relaxing activities can also release the stress-busting hormone, she added.

When people can’t be together physically, Feeney said they need alternate ways to communicate what touch usually says, telling people they are valued, loved and cared for.

“We have shown in our research that imagining affectionate (supportive) touch can have the same benefits as actually receiving it,” said Feeney. Physical presence isn’t always needed because “people develop mental representations of close others through repeated experience with them and can benefit from that psychological closeness even when physical proximity is unattainable.”

As for hugging office friends, that has to wait for now. When it’s safe again, I suspect more of us will be reaching out.